The food selection at Sylvia Park exemplifies its core problem: because the mall is laid out in a long strip, the management decided it is a good idea to have duplicate outlets at both ends of the mall. This has led to the rather boring situation where the same mall houses two Subway franchises in ridiculous proximity (literally within the line of sight of each other), two West Coast café(they actually make good coffee), a couple of very similar Chinese buffet(Same price, same sized plates, same pile of deep fried mystery "stuff" and even showing the same sign saying that their food does not contain MSG, well that is scientifically impossible) and two identical sushi joints(where the management is mostly Australian, the workers are uniformly Korean, and their sushi is so consistently bland that they must have imported the ingredients from England, seems like sushi has nothing to do with Japan anymore). The food problem gets so bad that my co-worker often took unauthorised long breaks to have lunch at home, by the way he lives in Remuera 20 minutes drive away.

If we take out the duplicates, the major fast food chains, all the run of mill cafés and the Indian canteens (Seriously, they make exactly the same meals that is offered at Hare Krishna parties and it is not even free) we are left with a few eateries that all had a juice bar and pot of weed wheatgrass growing proudly by the cashier to prove their middle-class consciousness.

Issis is one of the few remaining non-ethnic place (I mean the food, it is still run by the, um, certain enterprising ethnicity) that does not display their yuppieness up in the air. Their menu include a few combinations of:
While everything is made from fresh except the pasta, a spaghetti/fettuccine hybrid kept alive warm in an incubator, cooked well beyond al dente but at least it is not machine made; and the sauces which appears to have been simmering since Moses parted the water. The bacon & chicken carbonara I ordered for lunch is the said pasta with a scoop of thin sauce full of bacon scraps that did not make it to the slice and no trace of chicken at all, maybe mentions of "chicken" always imply "chicken salt". After all I can eat this without complains because it tastes just like my own cooking on a Wednesday night(not including the plastic cutlery and bottled drink). Familiarity conquers all.

The accompanying salad is much more impressive: Fresh, crispy and everything in just the right quantity. The dressing is disappointing just as expected but easy to ignore.
Posted by Laforet at 10:14 PM

Disclaimer: I am not associated in any way with the manufacturers and/or resellers of the products mentioned here. A lot of technical information has been (overly) simplified to facilitate understanding however I try to keep them as accurate as possible. The Gevey device in concern has just began shipping earlier this week, I have had very limited time with it so consider all information as preliminary and expect frequent updates/corrections. Your feedback and inputs are most appreciated, tweet @DillADH

For much of the last two years time, even the manufacturer of these SIM hack products acknowledge that their product is no longer needed; so it was quite a surprise when Gevey announced that they have something that will unlock the iPhone 4. Contrary to conspiracy theories, they withheld onto the product because:

I have made a mistake earlier by calling it TurboSIM and it is not. @MuscleNerd reminded me of the correct term "SIM interposer", since it sits electrically between the SIM card and baseband hardware to perform a classic Man-in-the-middle Attack.


How did It Work?

SIM card holds many different types of information, but the part most involved with carrier lock is the IMSI number, which is a unique code that corresponds to your account in the mobile carrier's database.

The first two segments are known as Mobile Country Code (MCC) and Mobile Network Code (MNC) respectively, and in the example above the IMSI indicate the SIM is from USA (310) AT&T (150).

When the iPhone baseband is loaded into memory, it checks the MCC and MNC against its own network lock state stored in the seczone. If the combination is allowed, the cell radio is activated and vice versa.

The earliest iPhone baseband revisions only check IMSI twice following a restart, therefore it is very easy to spoof information in order to bypass the check. Nevertheless, the baseband was soon updated to validate SIM more aggressively and the method no longer works.

To guard against eavesdropping that plagued pre-GSM cellular networks, the initial connection to a network does not only involve IMSI, but a 4-byte TMSI to identify each handset before IMSI is sent. The base station recognises the IMSI as one of their users and replies with a nonce (RAND) to the handset, where is signed with a 128bit key (Ki, stored encrypted on the SIM) and sent back. The network checks the string against their own result using the same RAND and Ki and allows the device to register if the two value matches.


You see, the IMSI is only sent once and never directly involved with authentication; as long as your key is valid, you will be able to get service. This is exactly what the various SIM hacks where a fake IMSI is sent along with the correct key. The IMSI is redirected to another network and lost, In our case, the IMSI is invalid but some network proceed to the next step anyway - I will explain this in detail later.

The result of SIM hacks has always been erratic since the outcome depends on the implementation of the hack as well as the policies of the network; and people were inundated with a long list of issues and makeshift solutions. e.g. Cellular data may and may not work depending on the chemistry; a common remedy is to periodically put the hacked SIM into an unlocked "nanny" phone to "keep the TMSI fresh".

The use of SIM hacks fell sharply after iOS 2.2.1 update where the new baseband were made aware of the method and reject dodgy exploitable IMSIs, even the better designed interposers suffered frequent failures. It is about the same time software unlocks were developed and it pushed SIM hacks further into disuse. However the technology has been kept alive since a number of GSM handsets, mainly those coming from Japan, remains vulnerable.

Apparently somebody figured out that while the i4 baseband has been patched to prevent test IMSI from working, it is still possible to force activate the baseband using the emergency dialer.

After that, it is relatively the same trick all over again. Let's see what it does at each step. 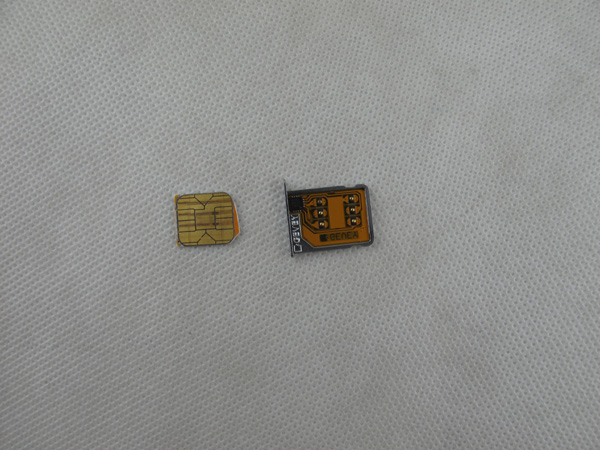 You will need to use the SIM tray supplied and file your MicroSIM slightly to accommodate the EEPROM chip. 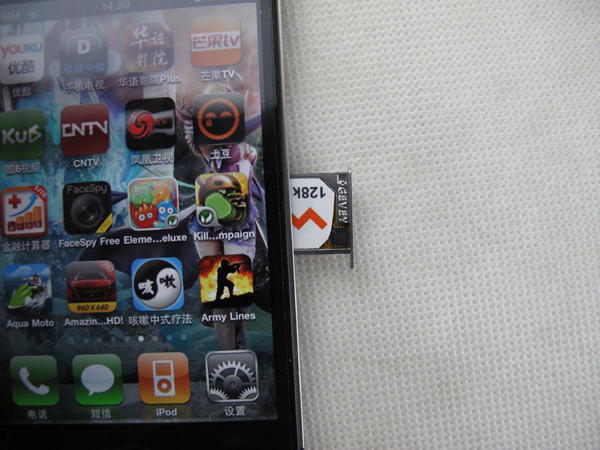 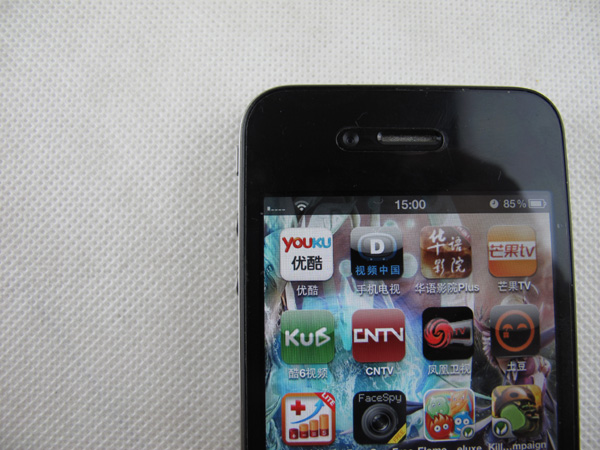 The phone will search for signal, comes up with no service and finally settling on this "one bar" icon. At this stage the sim interposer is passing the parameters from the SIM as is. Earlier hacks required the fake IMSI to be programmed manually however this device is obviously capable of rapidly cycling a list of IMSI until an accepted MCC/MNC combination is found. pre-programmed with an exploitable IMSI. It may also spoof ICCID since the iOS is known to occasionally check that. 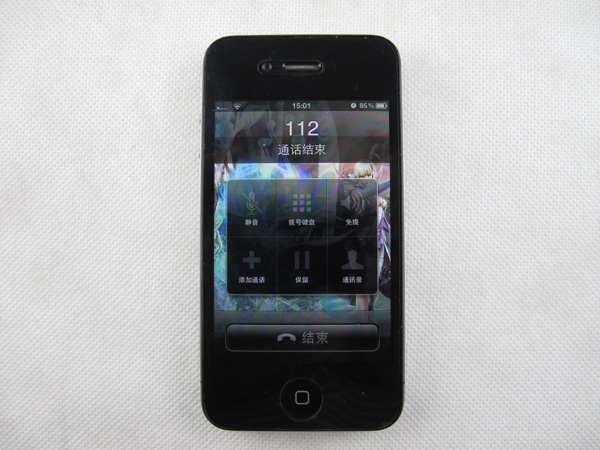 Dial 112 and hang up after the call is connected. The emergency call overrides the network lock and activates the cell radio. The network issues a TMSI for your real IMSI. 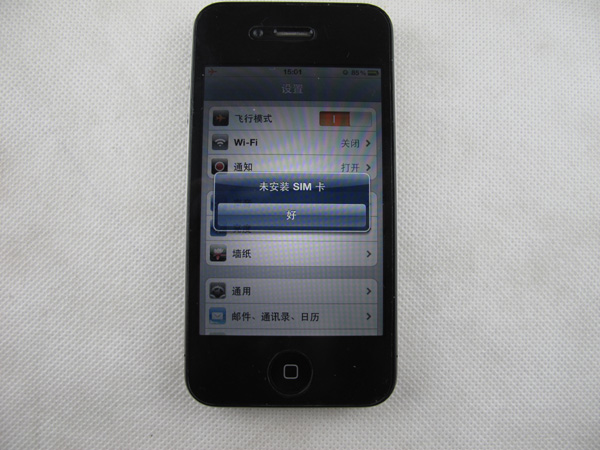 Toggle flight mode On/Off. Once the interposer senses flight mode, it transiently blocks electrical connection between the phone  and the SIM (hence it will show "No SIM card installed") before sending spoofed IMSI. The BB allows the SIM and attempts to connect to network. What exactly happens is not too clear but apparently the interposer ROM block electrical connection to prevent the BB from detecting the fake IMSI. 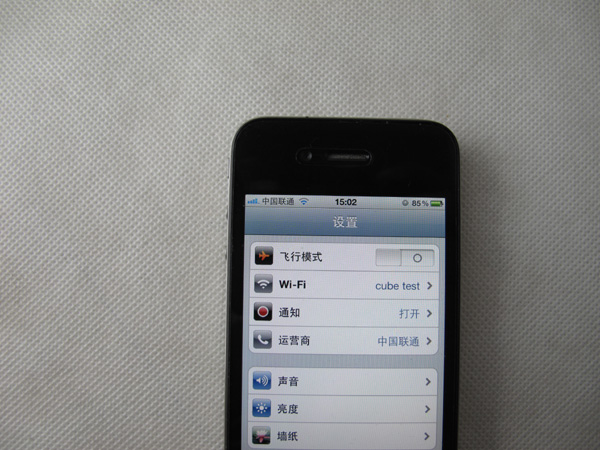 The signal bars appear, we are safe:-) The network is able to register you again because the TMSI you obtained earlier is still valid, and the IMSI is not checked again. That is after the network ignored the fake IMSI (which the phone has no knowledge of) but allowed the SIM onboard because it is able to validate that.
Why 112?

112 had a long history as an emergency number for practical reasons; back then when the GSM standard was being drafted in Europe, 112 was chosen to be the universal emergency number to call that can be called from any GSM phone, free of charge, with or without a SIM card on any compliant network.

However long before GSM service was established, 112 has been used to report landline faults in China; the coincidence made it unsuitable as a true emergency number. The network still connects 112 as an unbilled emergency call, only to play an automated message in both Chinese and English informing callers of the correct emergency numbers to dial; the call is never redirected.

What does it mean to unlockers?

Conclusion:
An overpriced (US$50 US$70, although clones are just starting to appear), unreliable and legally questionable mod; works for some but your mileage may vary; get it if you are desperate or wait for the 40-bit 56-bit NCK hack or the eventual SW unlock by the iPhone dev team.
Posted by Laforet at 10:53 AM

A few words on the recent iOS 4.3 release 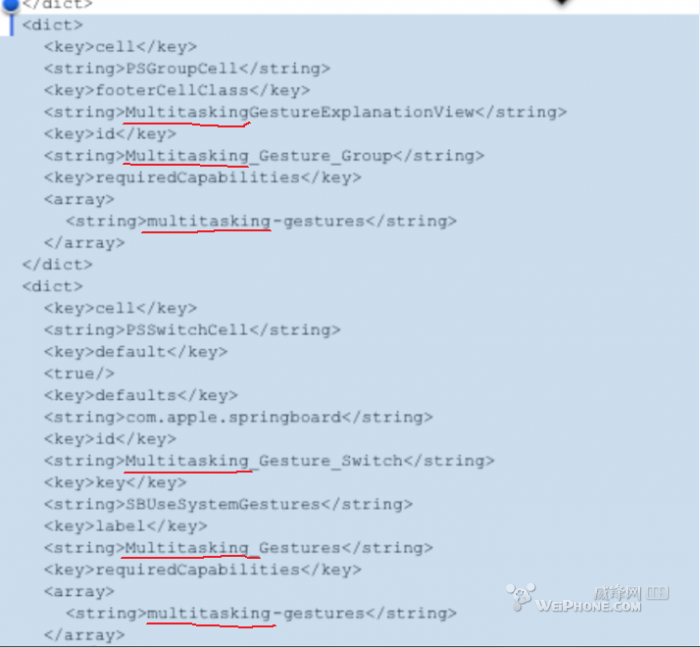 Update: Apparently jailbreak is not necessary, you can edit the said file in an iTunes backup and restore to get the same effect.
Posted by Laforet at 1:50 PM